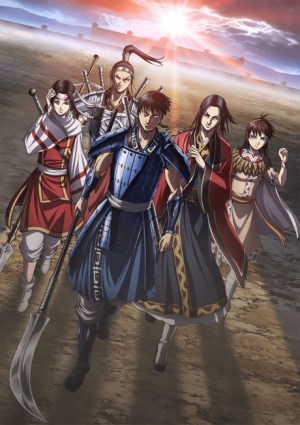 The fourth season of Kingdom.

Following the conclusion of the large-scale coalition campaign, the entirety of China is in a state of economic recovery. The victor of the battle, the state of Qin, is no different. There, the political parties led by Ying Zheng and Buwei Lü continue their inner conflict. Having played the role of king in the coalition battle, Zheng has the trust of the people—but Lü is far from out of the fight. In 18 months, he plans to interrupt Zheng's coming-of-age ceremony.

Meanwhile, a Zhao army numbering 20,000 troops has set out toward Qin. In the royal court, due to the lack of generals capable of responding to the incoming threat, Lü slyly suggests that Zheng take command. However, Cheng Jiao, Zheng's half-brother, volunteers instead. As they grew to trust each other during the coalition battle, Zheng now accepts Jiao as his replacement.

However, the Zhao forces retreat a mere half-day after clashing with Jiao's army. With trouble quickly brewing in the shadows, the internal struggle of Qin is only complicated further. There are only two men Zheng feels he can rely on: Bi, a general who commands 30,000 men; and Xin, the leader of the Fei Xin force.